Volumetric molecular imaging to determine the chemical composition of an object has become critically important in a number of application areas, such as homeland defense, port inspection, and airport security. Promising techniques for performing such analysis include interrogation of the object with x-ray radiation, which has been relied upon for years to provide insight into the structure of objects in the areas of baggage inspection, medical imaging, and semiconductor crystal analysis, among others. Historically, conventional x-ray inspection systems have been used only to measure variations in the manner in which the x-rays propagate through an object (e.g., absorption). Unfortunately, this does not provide information about molecular or atomic identity. There are available techniques that exploit the unique x-ray scattering behavior to assess the molecular structure of a material, but these are difficult to employ in a real-time molecular imaging system. There remains a need, therefore, for an improved imaging system that noninvasively ascertains the structural and molecular composition of three-dimensional objects at high speed and with relatively lower cost and complexity.

A new Duke imaging system provides a volumetric molecular image of an object intended to be applied in real-time for applications such as biological and industrial imaging, chemical analysis, and the detection of explosives and contraband via security screening. The imaging system interrogates the object with structured x-ray radiation while continuous relative motion between the object and source is induced during a measurement period. As the radiation passes through the object, the radiation scatters based on the molecular composition within the object, and the scattering changes as a function of time due to the relative motion between the source and object. Coherent scatter radiation is detected and processed to reconstruct an estimate of the three-dimensional molecular structure of the object using a reconstruction algorithm. This technology promises real-time molecular tomography of bulk objects without a loss in imaging performance. The inventors have experimentally demonstrated the ability to image a material composition at every object location within a plane using a single detector pixel. 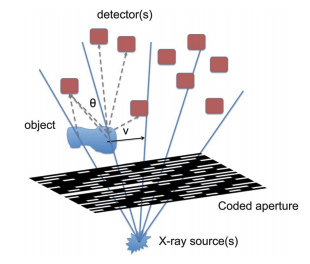